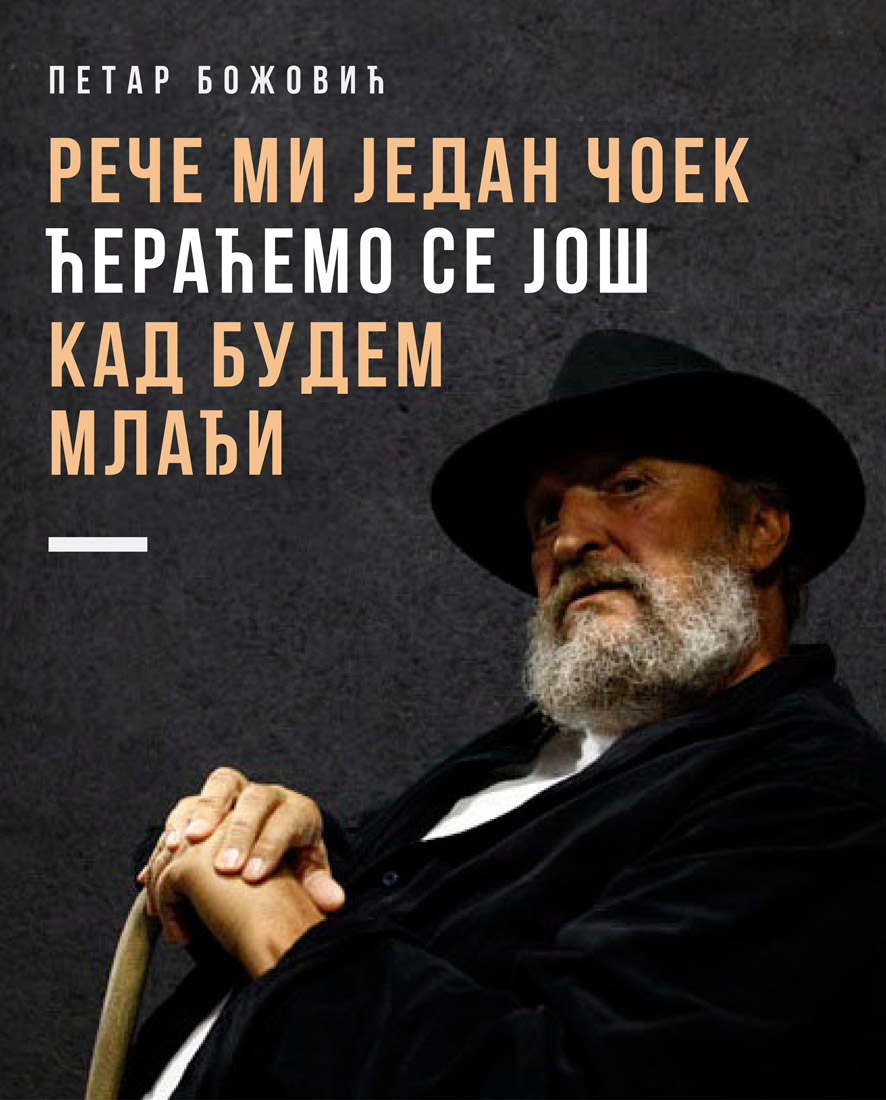 About the Play
The monodrama “One Chap Told Me” is pieced together using several poems that speak of life in Rovci – the fights and plights of the ordinary man. This performing text compiles poems “The Death of Perko Pušeljin”, “The Grandson of Aleksa Marinkov Cries Over Monte Negro”, “The Spy in Rovci”, and many others. The lines of “One Chap Told Me”, like the central motif, appear throughout the drama. We’ll be at it again, but peacefully, strictly diplomatic using diplomatic tools within the system without using force, completely at-ease…

About the Author
Matija Bećković is a Serbian poet, writer, philologist, and a member of the Serbian Academy of Sciences and Arts. His first poem, “Preludium”, appeared in “Mlada Kultura” in 1957 while he was still in high school. His first book, dedicated to the love of his life bearing her name, was published in 1962. His prose and poetry works have been adapted for theatre and performed both on local and international stages. In 1978, his play Medja Vuka Manitoga was performed at the National Theatre in Belgrade, quickly followed by One Chap Told Me, and You Don’t Know Them monodramas. In addition, he wrote two television plays, and two one-act plays for children broadcast by Television Beograd in 1966 and 1967. He received a number of awards for his work, including four awards for the poem “We’ll Be at It Again”.

About the Performer
Petar Pera Božović is a Serban film, theatre, and TV actor. During his decades-long career, he played over 200 roles on TV and film. He has worked with some of the most significant Yugoslavian directors – from Zdravko Velimirović, Puriša Đorđević, Krsto Papić, and Dušan Makavejev to Lordan Zafranović, Srđan Karanović, Goran Paskaljević, Rajko Grlić, Goran Marković, Miroslav Momčilović, Stevan Filipović and Srđan Dragojević. However, some of the most memorable roles that the audience remembers him best are Željko Nikolić’s. He entered the annals of film history with his role of Zeljo in Unseen Wonder, the love doctor in Wait for Me and I Will Not Come, Atifaga in the Knife, and many others. As an award-winning actor, he received a plethora of accolades, including the prestigious Dobričin Prsten Award in 2020.